When I was a boy growing up in the Blue Ridge Mountains of Virginia during the Great Depression we subsisted partially on my father’s ability to hunt for game, on the plentiful bass and catfish from the Rockfish River and also on wild fruits and berries which grew in abundance in the area, but most especially on the vegetable garden which we tended and which rewarded us generously from the early spring peas to the huge pumpkins that we harvested and either carved into Jack O Lanterns or made into pies in the fall.

I was a sensitive boy, a failure as a hunter.It was painful to me to deal the coup de grace to a quail that had only partially been killed by the spreading birdshot of a twenty-two rifle. I was repelled when a deer had only been wounded and the harsh struggle that had to take place in order to subdue it. And while I continued to fish even into adulthood there came a time when I questioned if the gigantic king salmon experienced pain while I engaged in the hour of “sport” it took to drag it out of British Columbia’s legendary Rivers Inlet.

The one source of food that I took part in planting, cultivating, and harvesting and which gave me the greatest pleasure was gardening. My father’s earliest garden was a sizeable plot on the bank of the Rockfish River. We planted our crops following directions from “The Old Farmer’s Almanac” (Plants that were to be harvested above ground to be planted when the moon was full. Plants that came to fruition underground were to be planted on the dark of the moon!) And it worked!

It was my duty to take water from the Rockfish River and carry it to whatever hill or row was carrying seed. I can still remember the awe and astonishment I experienced when the first tiny leaf of tomato or a string bean or cucumber first showed its face.

I suspect that if my life had followed the pattern like that of the other boys in my village I might well have become a farmer, found a nice local girl and settled down to a life similar to that my parents knew. But due to a set of near miraculous circumstances it was not to be my destiny. Laura Horsley, the wife of our local doctor had friends on the board of directors and nominated me to receive a scholarship at the University of Richmond. The scholarship was awarded and I left the Rockfish River behind. In my sophomore year I was drafted into the Army of the United States and left Richmond, Virginia behind. As a soldier I was stationed in Paris and for a while I fell so in love with that city that I nearly left my own country behind.

I was a far different person when I returned to Schuyler Virginia after the war. While I still hated to wring a chicken’s neck or killing the deer. I could do it. And I discovered that while the Army experience had toughened me, I still felt the awe and wonder of a seed’s awakening and growth. I had visited New York City on our high school Senior Trip. We had gone there to visit the 1939 World Fair. The fair must have astonished most visitors, but coming from my background, it was a glimpse into a world I could not even have imagined. We stayed on Columbus Circle at a hotel that I believe is still there. I loved the city from the moment I first stepped out of the hotel door and breathed in something ineffable that told me that this was my spiritual home. And I promised myself on that trip that someday I would come back and live there. Soon after World War Two I kept that promise and from the moment I arrived I became a New Yorker.

The apartment I rented was described in the classified ads as “for the discerning few.” Actually it was rather special for the price. The owner was an architect and he had stripped the walls down to the original brick and painted them white. Although it was really one large room the space had been utilized adroitly. The bed conveniently disappeared under a raised stairway platform, which led down to the floor of the room. The kitchen was hidden behind a folding door and the bath was its own separate room. The most interesting feature of the apartment to me was not the interior but the exterior. All along the length of the front window was one long deep planter box in which the owner had cultivated a showy bed of geraniums.

I am sure that the owner, a fastidious man, would have had an apoplectic fit if he had ever discovered that hidden in the geraniums I had reverted to my childhood passion to grow things and planted tomatoes, cucumbers, and a bed of wax beans.

My profession led me to California and in its endless sunshine, and climate so hospitable to growing things, my passion came alive again. Our house is on a hillside and what level ground there is became a rose garden which is Jane’s pride and which supplies the house with fresh roses just about all year round.

This year I had an inspiration. I realized there was a level surface! It existed on a long deck surrounding the swimming pool. Why not raise a container garden! Not exactly compatible elements with a pristine turquoise swimming pool from a decorative point of view, but what the hell! As the saying goes, “You can take the boy out of the country, etc.”

I envisioned what the Los Angeles Times recently described as an “Urban Meadow,” but once assembled the deck began to look as if the Beverly Hillbillies had moved in. But what the hell! Jane’s roses filled the house with beauty. My garden would fill it with fresh healthy produce.

The spring weather was most beneficial with cool nights and bright sunny days. All the seeds went to work enthusiastically and I would rush down to the deck each morning at first light to rejoice at the miracles taking place.

I fantasized about the rich harvest that was sure to follow. I gazed with pity on shoppers in our market as they spent good money on produce from God knows where, sure to be laden with hormones and cancer causing preservatives. I pictured myself, wearing a straw hat and overalls, going from neighbor to neighbor with gifts of hefty beefsteak tomatoes, baskets of crisp wax beans, slender succulent cucumbers, and huge purple eggplant. My visits would inspire others to follow my example. They would foster good neighbor relationships during this deplorable time when trust and good will are disappearing from our society. My garden would sew the seeds for a better world!!

But then a long wet spell set in and I did not visit my “meadow” as often, but when I did I found my infant plants began mysteriously disappearing.

When I kept watch I discovered that the very blue jays, mocking birds, sparrows and linnets that we had fed and treasured were the culprits. I started afresh but covered the next generation of seedlings with netting. The butterbeans came to vibrant life. The cucumber vines were aggressive immediately and were climbing to ambitious heights and the egg plant blossomed when it was only a few weeks old. I bought tomato plants already close to producing fruit and within a week tomatoes the size of marbles appeared. My garden was a marvel.

And then one morning my produce began to disappear. The tomatoes were the first to go, and then the beans. The mystery was solved when I kept watch one dawn and witnessed the raids by ground squirrels, rats, raccoons, skunks, mice and even a family of ravens. I fought back with traps, but the critters outwitted me. I caught one ground squirrel in a Havaheart trap, but I was too tender hearted to drown it and so I drove to Griffith Park and released it. I did harvest a tomato, but like the great fish in Hemmingway’s book “The Old Man and the Sea,” the trophy has been half eaten and was a skeleton of what it had been.

I did manage to arrive early one morning with my camera to catch the one last item the beasts had overlooked. 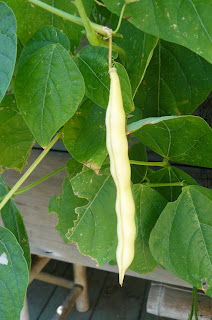 I harvested the wax bean and rushed in the house to show it to Jane.

With her usual sweetness and generosity, she said, “Earl, it’s your bean.”

I am happy to tell you that my literary harvest has been more productive. When I came from New York to Hollywood in 1961 Rod Serling gave me my first job – an assignment on “The Twilight Zone.” That job opened the door to a lifelong career in television and film and I will always be in Rod’s debt.

During those years I kept a file of ideas for "Twilight Zone" type stories and just this month three of them are seeing the light of day.

"Dark Discoveries” is an exciting new magazine specializing in fantasy and darker type fiction. The present issue has an interview with George Clayton Johnson, an entire script by Bill Nolan and an article by novelist and poet, Christopher Conlon about work that was intended for “The Twilight Zone” but which were never telecast.

I have too a short story in the issue about an aging writer and what happens when he exchanges his sports car for a more sensible model. It is available at newsstands or by contacting the magazine at http://www.darkdiscoveries.com

The same publisher has an anthology called “The Bleeding Edge” and my contribution is a story about a boa constrictor and two brothers who strive for the affections of an exotic dancer. Available by following this link: http://www.jasunni.com/shop/

I harvested one more story from my "Twilight Zone" file. It is a mysterious tale about the revenge a bonsai enthusiast visits on a man who injures one of his valuable trees. It is in a collection called “Twilight Zone, Nineteen Original Stories on the 50th Anniversary” Edited by Carol Serling. Available from all book stores as well as Amazon.com. This “Harvest” is dedicated with gratitude, respect and admiration to the memory of Rod Serling, a fine man, a remarkable writer and a good friend.